'Never judge a book by the cover', but I did once many years ago.

The front cover illustration of that edition of Troubles by J.G. Farrell featured the interior of a burning house and it was no surprise to find the setting of the novel was Ireland in 1919. J.G. Farrell (1935-1979) was born in Liverpool of English, Irish and ex patriot parentage. He spent a large part of his mature years in Ireland, attended public school in England, on to Oxford and lived in various countries including France, the U.S., India, Vietnam and Singapore. These travels and experiences sparked his imagination and influenced his writing especially that of his famous Empire Trilogy comprising of Troubles (1970), The Siege of Krishnapur (Which won the Man Booker Prize 1973) and The Singapore Grip (1978). The three novels are all set in the dying days of British Colonial rule and the human and political consequences in the different countries.

In Troubles, Major Brendan Archer, recovering from his experiences in the trenches in France arrives in Ireland to claim Angela the fiancee he barely remembers meeting while on leave 3 years earlier. Angela's family run the crumbling, once splendid Majestic Hotel where eccentric, elderly residents cling to their belief in the glorious British Empire in contrast to the Republican resolve of the majority of the locals. The war of Independence is memorably evoked by occasional excerpts of the Irish Times of the day which ass much to the mounting sense of alarm and foreboding.

There are however many lighter moments - some laugh out loud. This literary historical novel is hard to forget and it won J.G. Farrell his second (posthumous) 'Lost' Booker in 2010, as voted by international e-vote.

I've reread Troubles three times delighting in this unforgettable story. It is no surprise to find that more than 40 years after his death J.G. Farrell continues to intrigue, entertain and engage. 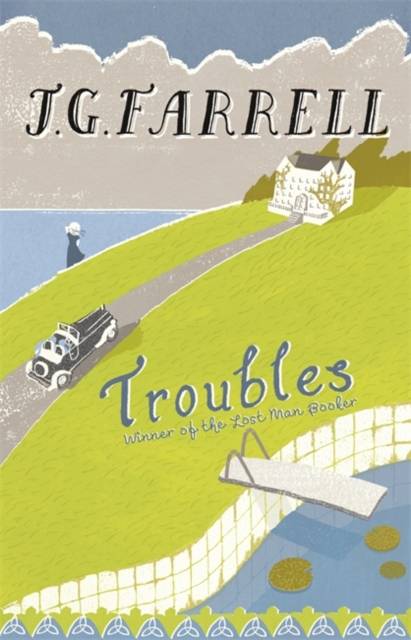